The Sluzar Music Score is a collection of over 1,600 handwritten, copied and printed sheet music items and musical scores, and it contains more than 2,500 individual songs. The collection was donated to the Bohdan Medwidsky Ukrainian Folklore Archives at the University of Alberta in 2011 by Dr. Roman Sluzar, son of late Reverend Wolodymyr Sluzar. This phase of the project focuses on the approximately 500 handwritten scores.

Who can benefit from the Sluzar Music Score collection?

Anyone! For the performer and music lover alike, this collection is a veritable treasure trove of information and musical enjoyment.  Choir directors, music enthusiasts and fans of Ukrainian music are welcome to use this special collection and perform these unique pieces of composition.

This collection contains a unique variety of musical genres – from folk songs to opera and operetta scores, and from classical to liturgical and spiritual songs. Most of the pieces are arranged for choral performance; however, many solos, duets, quartets, and even instrumental arrangements are included as well.

The collection spans nearly a century in its compositions and publications, from the late 1800s to the end of the 20th century. Its songs reflect the incredibly rich historical legacy of the Ukrainian people and chronicle events from Cossack and chumak times all the way to the World Wars of the 1900s. The collection also strongly reflects the customs and traditions of the Ukrainian people through its assortment of folk songs – from hahilky and Kupalo songs to koliadky and shchedrivky. Moreover, the Sluzar Music Fonds does not exclusively house Ukrainian music; it also includes songs written in Russian, Latin, Church Slavonic, Polish, German, and Greek.

The handwritten items in the collection are particularly beautiful, and many of them contain meticulous and detailed annotations about the items’ origins and date of creation. For instance, one handwritten booklet sports the note: “1.5.1950, 10:45pm” (item 60), while another boasts that it was “written: 24/XII at 9pm-2am, 1943” (item 568).

Rev. Wolodymyr Sluzar was born in Chunkiv, Bukovyna in 1895 and immigrated to Canada in 1923. He was ordained shortly after his arrival and served in several parishes in Saskatchewan before moving to Montreal to establish the first Ukrainian Orthodox parish in Eastern Canada. He retired in 1972 and died in December of 1976. As well as being an ordained priest, Rev. Sluzar was a choral conductor, and so his personal collection of sheet music is extensive. 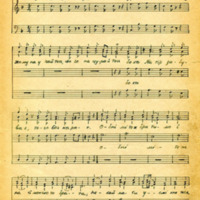 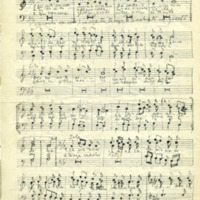 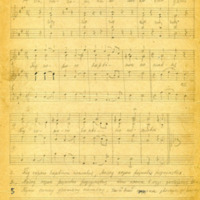